A new paper in Nature Communications by Brenner et al. demonstrates in mice and in human patients that cancer control strictly requires the activation of tumour-intrinsic, senescence-inducing cell cycle regulators by the immune system to stably arrest those cancer cells that escape from eradication. 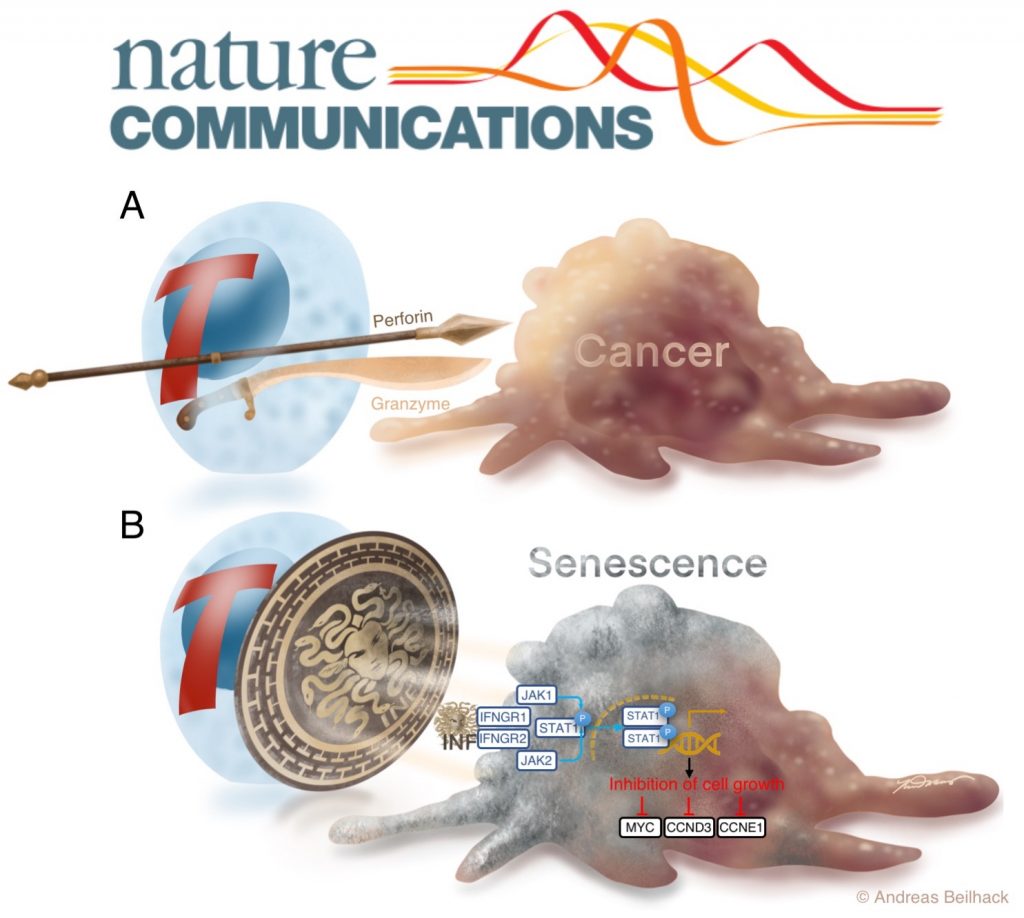 Mechanisms of cancer immunosurveillance. (A) Conventional and cancer immunotherapies can enhance direct cytolytic effector mechanisms of cytotoxic T cells and NK cells. (B) TNF and interferon released by Th1 T cells can induce and maintain cancer cell senescence. Mutations in the interferon-senescence-signalling pathway in tumor metastases can abolish this important mechanism and result in cancer progression.

Recent advances in cancer immunotherapy allow to efficiently unleash immune effector cells. Consequently, T cells, NK cells and macrophages can kill malignant cells throughout the body in patients with hematologic and solid cancers. Even if these therapies primarily aim to completely eradicate all cancer cells, often enough cancer cell killing remains incomplete and does not sufficiently and permanently control cancer. Moreover, the majority of cancer-related deaths do not result from the primary tumor. Instead, months or even years after initial therapy, cancer metastases arise from reawakened, dormant cancer cells that had been resistant to chemo-, radiation- or immunotherapies.

In a collaborative multidisciplinary effort lead by the team of Prof. Dr. Martin Röcken from Tübingen University and scientists from Tübingen and Würzburg University, we uncovered that IFN-γ/STAT1-dependent activation of the senescence-inducing cell cycle regulators p16Ink4a/p19Arf and p21Cip1 is required to keep cancer cells in a senescent state that had escaped immune cell mediated killing. Conversely, metastases that acquire mutations in the IFN-γ-senescence-inducing signalling pathways become resistant to immunotherapies and progress. In line with this, our study discovered that more than half of the metastases of patients not responding to immune checkpoint inhibitor therapy had at least one defect or genetic alterations in the IFN-dependent senescence-signalling pathway. Consequently, drugs that can re-invigorate the senescence-signalling pathways in cancer cells such as CDK4/6 inhibitors appear promising to be combined with cancer immunotherapy.

This work pinpointing key mechanisms required for protection against cancer cells that escape from cytotoxicity was supported by the German Research Council (Deutsche Forschungsgemeinschaft) in the research consortium FOR2314 Targeting therapeutic windows in essential cellular processes for tumor therapy and the Wilhelm Sander-Stiftung.